Tom Bartlett, President and CEO
On the fine evening of July 15th, 2015, Durant High School’s auditorium in Oklahoma resonated with thundering applause as the then U.S. President, Barrack Obama, took the center stage to announce the launch ofConnectHome Initiative—a public-private collaboration designed to narrow the digital divide. His first words were, “The internet is not a luxury; it is a necessity.We need to step up and close the digital divide in America, and make sure everybody in America has access to high-speed broadband internet.”

Not long afterward, responding to this call to action, every wireless communications technology provider in the country started doubling down their rural broadband projects with the sole aim of bridging the invisible ‘broadband’border separating the rural and urban worlds. And so far, their efforts have been fairly successful as well. According to the U.S. Federal Communications Commission published last year, a sizeable portion of the rural community (65 percent) is already connected to the internet.

But much work is still left to be done!

In the U.S. alone, there are almost 42 million Americans that are still deprived of the social and economic benefits of a connected society. Rising to meet this pressing priority, American Tower Corporation [NYSE:AMT]—a leading wireless communications infrastructure provider—is taking up the mantle to become the conduit of the massive digital gap. The company is working with more than 500 wireless internet service providers (WISPs) across the country to offer fast and reliable broadband services quickly, economically, and effectively to the internet-deprived communities.

American Tower was founded in 1995 on the principle of developing top-tier wireless and broadcast communications real estate to provide sustainable internet to all. To make that happen, the company actively assists operators and WISPs with a robust suite of in-building systems, outdoor distributed antenna systems,and other right-of-way options, such as managed rooftops and services that speed up network deployment. Besides, American Tower’s global portfolio of wireless and broadcast towers, which is approximately 187,000 communications sites, including more than 43,000 properties in the U.S. and nearly 144,000 properties in Canada, can be leased by operators to deploy broadband networks in a vast range of environments, even the hard-to-reach rural geographies. Getting Ahead of Weather-Related Outages.

When it comes to offering fail-proof wireless networks, preemptive measures also need to be taken by companies to ensure the communication towers and equipment are prepared for the upcoming seasons or even for an untoward calamity. With its decades of experience in the domain, the company is well aware of how snow and ice can wreak havoc on power grids in the northern part of the country, tropical storms and flooding can impact the southern U.S., and wildfires can disrupt network in the west coast region. American Tower efficiently addresses such concerns for the network operators through its comprehensive backup power generators program and an annual maintenance and storm preparedness protocol.. Completing that, the company also offers remote monitoring and troubleshooting, with the help of which they can detect and resolve network issues faster and reduce site visits. Moreover, the company’s round-the-clock Network Operations Center (NOC) continuously monitors 36 network downtime indicators, and is ready to respond to any issue, with an average repair time of just over 3.5 hours.

These competencies, together, is the secret sauce to the company’s strong performance of a whopping 99.99 percent availability year over year. No matter what type of weather is thrown at them, American Tower keeps the networks up and running.

Underpinning the Next Evolution of Wireless Connectivity

The company is of the belief that the spectrum of technological innovation taking place in the wireless connectivity space right now was unthinkable even a decade ago. And these evolutions are indeed becoming an economic force that is driving communities forward. Standing at the cusp of these industry trends, American Tower is perfectly poised to drive the wireless revolution even further. As a matter of fact, American Tower’s wireless infrastructure solutions are often considered the foundation for tomorrow’s 5G, the Internet of Things (IoT), and next-gen TV technologies. Emphasizing on American Tower’s vantage point, Tom Bartlett, president and CEO of the company, says, “5G is going to be the next frontier, and we intend to deploy a variety of high, low and mid-spectrum assets, some of which we have already started offering to our clients.As we advance, we will continue to see the deployment of high-band millimeter-wave in densely populated urban areas, mid-band spectrum in suburban areas and highway corridors, and low band spectrum across rural geographies to provide the maximum coverage for 5G network.” These projects, according to Bartlett, will enhance the country’s distance learning and telehealth services that have been playing a critical role in boosting America’s economic spurt.

Opening New Doors for 5G with In- Building Networks

One of the major breakthroughs for American Tower in the 5G domain stems from their unique distributed antenna systems (DAS) that can be used to design and build 5G in-building networks. The manifold benefits of this short-range network solution can be perfectly illustrated through the story of how American Tower has been turning NASCAR race days into an ultimate fan experience.

While providing fans with heart-pumping, high-energy thrills of the motorsport, NASCAR’s organizers, International Speedway Corporation (ISC), also wanted to bring better wireless connectivity at the race tracks for further engaging the live audience. To accomplish this, American Tower installed its DAS offering to amplify the facility’s network coverage. With these installations at NASCAR tracks, wireless connectivity was possible in the remotest corner of the stadium, which previously suffered from the poor network. And this makeover not onlyimproved the fan experience but also helped many other people at the facility operations team and the NASCAR broadcast teams who needed to communicate wirelessly at any given time using two-way radios. American Tower’s well-rounded wireless network solution significantly enriched the experience for the NASCAR fans and the race’s management team alike.

This is but one of the case scenarios; American Tower has been scripting many of such success stories over the years. Backed by these proven methods, American Tower is now also gearing its offerings to help more clients meet their new challenges brought on by the pandemic. As people worldwide have started shifting to remote work and learning, the importance of high-speed internet has started becoming more apparent. In these conditions, American Tower is ensuring seamless wireless connections wherever required through its portfolio of solutions. At the same time, the company is investing considerably in enhancing its services by incorporating new technology trends of the wireless market. Simply put, American Tower is well on its way to meet the next internet revolution that will follow the pandemic and ascertain that none of its wireless network operating clients is left behind in this massive overhaul. 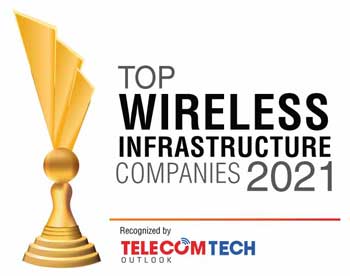 Description
A leading owner, operator, and developer of wireless communications infrastructure with sites nationwide. American Tower Corporation—a leading wireless communications infrastructure provider—is taking up the mantle to become the conduit of the massive digital gap. The company is working with more than 500 wireless internet service providers (WISPs) across the country to offer fast and reliable broadband services quickly, economically, and effectively to the internet-deprived communities